A Quadratic Programming problem (QP) in the form of

, can be transformed to a Second-Order Cone Programming (SOCP) problem in the form of

is equivalent to minimizing

, and hence is equivalent to minimizing

, then the objective function in QP

. We can thus minimize

Thus, the QP problem can now be written as

, by definition of QP, is symmetric, a symmetric

can be found such that

. If the QP is assumed to be a convex QP,

is always non-negative, the equality constraint

Finally, each row in the inequality constraint

is the i-th row of

is the i-th element of

Therefore, a QP problem can be transformed to an equivalent SOCP problem in the following way. We need to introduce a few variables first. 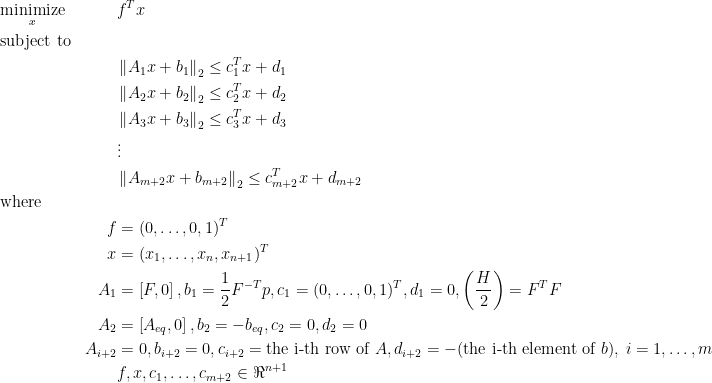 The sub-vector with the first

SuanShu has implementations to solve both SOCP and QP problems.

Cloud computing is very popular nowadays. Delegating your CPU-intensive computation (or simulation) to the cloud seems to be a smart choice. Many of our users asked if SuanShu can be run on Amazon’s Elastic Compute Cloud (EC2), because SuanShu license requires a MAC address and they have no control on which machine being used when they launch an EC2 instance. Here comes a good news! Amazon Web Service (AWS) now supports Elastic Network Interface (ENI), by which you can bind your EC2 instance to a specified network interface. Therefore, you can license your SuanShu against the MAC address of the ENI, and launch an instance with the same ENI and MAC address. For details, please visit the blog here. User guide for ENI can also be found here.