“Building even a simple neural network can be a confusing task and upon that tuning it to get a better result is extremely tedious. But, the first step that comes in consideration while building a neural network is the initialization of parameters. One of the important things which we have to keep in mind while building your neural network is to correctly initialize your weight matrix for different connections between layers which plays an important role in the results as well as the computational time for convergence.”

Let us first look into the basics:

Weights and biases (commonly referred to as w and b) are the learnable parameters of deep learning models, including neural networks. Neurons are the basic units of a neural network. In an ANN, each neuron in a layer is connected to some or all of the neurons in the next layer. When the inputs are transmitted between neurons, the weights are applied to the inputs along with the bias.

Weights control the signal (or the strength of the connection) between two neurons. In other words, a weight decides how much influence the input will have on the output. Biases, which are constant, are an additional input into the next layer that will always have the value of 1. Bias units are not influenced by the previous layer (they do not have any incoming connections) but they do have outgoing connections with their own weights. The bias unit guarantees that even when all the inputs are zeros there will still be an activation in the neuron. 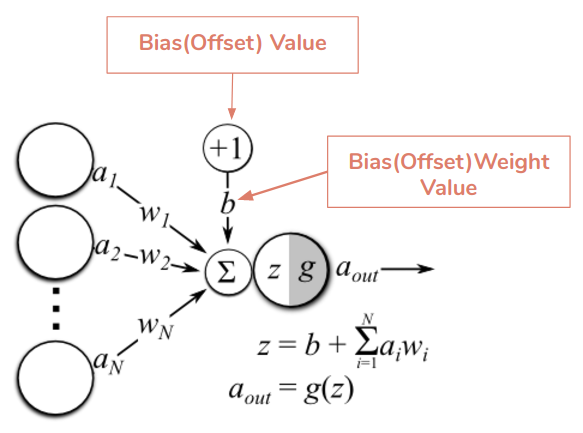 The importance of effective weight initialization:

To build a machine learning algorithm, usually we define an architecture (e.g. Logistic regression, Support Vector Machine, Neural Network) and train it to learn parameters. The common training process for neural networks can be listed as:

Now, given a new data point, you can use the model to predict its class. The initialization step can be critical to the model’s ultimate performance, and it requires the right method.

Deep learning based architectures are characterized by many hidden layers of neurons. However, the main limitation of these architectures is the long time required for training. Obtaining excellent accuracy and reasonable training time is a challenging objective for the deep learning community. Selecting an appropriate weight initialization strategy is critical when training different neural networks. Weight initialization represents the manner of setting initial weight values of a neural network layer. Deep learning methods are very sensitive to the values of initial weights. Initialization of weight seeks to assist in establishing a stable neural network learning bias and shorten convergence time.

The figure below shows the weight matrix showing the weights in different layers of a neural network:

Let us have a look at some of the basic initialization practices in the use and some improved techniques that must be used in order to achieve a better result.

In order to understand, let us consider the sigmoid activation function for the output layer:

If all the weights are initialized with zero, the derivative with respect to loss function is the same for every w in W[l], thus all weights have the same value in subsequent iterations. This makes hidden units symmetric and continues for all the n iterations i.e. setting weights to zero does not make it better than a linear model. One should note that setting bias to zero will not have any effect as non-zero weights take care of breaking the symmetry and even if bias is 0, the values in every neuron will still be different.

As we assign random values to the weights using this technique, this may also lead to some problems:

In the two procedures discussed above, we discussed the problems they can have, now we will discuss some solutions and heuristics which one can use to perform a better training of neural networks:

It is relatively robust to the vanishing/exploding gradient issue (especially for networks that are not too deep). With ReLu vanishing gradients are generally not a problem as the gradient is 0 for negative (and zero) inputs and 1 for positive inputs. In the case of leaky ReLu, they never have 0 gradient. Thus they never die and training continues.

We can use any of the following heuristics to initialize the weights depending on the chosen non-linear activation function:

Here the value of k is 2. Here size[l-1] is the number of neurons in the previous layer (l-1).This initialization preserves the non-linearity of activation functions such as ReLu activations. Using the He method, we can reduce or magnify the magnitudes of inputs exponentially.

Here the value of k is 1. Xavier proposed this heuristic which is a more straightforward method, where the weights such as the variance of the activations are the same across every layer. This will prevent the gradient from exploding or vanishing.

These serve as good starting points for initialization and mitigate the chances of exploding or vanishing gradients.The main objective is to minimize the variance of the parameters. They set the weights neither too much bigger than 1, nor too much less than 1. So, the gradients do not vanish or explode too quickly and it helps to avoid slow convergence, also ensuring that we do not keep oscillating off the minima.

Clipping the gradient is a helpful method when it comes to training deep neural networks. It is another way of dealing with the exploding gradient problem. We set a threshold value, and if a chosen function of a gradient is larger than this threshold, we reset its value. For Example: We reset the value of the gradients when its L2 norm exceeds the threshold value (if l2_norm(W) > threshold):

We consider Xavier Initialization method to show some code implementation:

The Xavier initialization method is calculated as a random number with a uniform probability distribution (U) between the range -(1/sqrt(n)) and 1/sqrt(n), where n is the number of inputs to the node. One can also consider random normal distribution in this case.

Now, weight can be represented as:

The example assumes 10 inputs to a node, then calculates the lower and upper bounds of the range and calculates 1,000 initial weight values that could be used for the nodes in a layer or a network that uses the sigmoid or tanh activation function.

After calculating the weights, the lower and upper bounds are printed as well as the min, max, mean, and standard deviation of the generated weights.

Running the code generates the weights and prints the summary statistics.

To initialize the weights of your custom neural network using different methods, one can import these initializers from the following package:

Weight initialization plays an important role in improving the training process of deep learning methods. It is even more important for some evolutionary algorithms which require initialization of the parameters in their population of candidate solutions. We focused a lot on the weights, but what about the bias in each layer of neural networks? An important point to focus is that the gradients with respect to bias depend only on the linear activation of that layer, and not on the gradients of the deeper layers. Therefore they do not have the usual problem of vanishing and exploding gradients.